Now that tax season is over, it's time to reevaluate how much money was withheld from your paycheck every pay period. In 2016, the average tax refund was $2,860. Sounds great, doesn't it? After all, who doesn't want an extra couple of thousand dollars? Well, not so fast.....

If you got a refund of $2,860, that means you gave the federal government an interest free loan of $2,860 last year. If you simply put that money in a CD at a 2% APY you'd have earned over $40 in interest on that money. 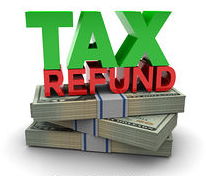 This doesn't sound like much, does it? it's only $40 in interest that you lost out on if you got an average tax refund, right? Multiply that $40 in interest by the 16,000 people living in my home town and you're looking at $640,000 that the federal government cheated my friends and neighbors out of by convincing them that getting refunds on their tax returns instead of writing a check for $50 or $100 at the end of the year because they didn't withhold enough to get a refund is a good idea.

Our paystub generator allows you to instantly create professional pay stubs online with ease!
Our template with it's automated calculations, makes it quick to build, preview, purchase and print your pay stub instantly!
Take a minute and make your own real paystub!